In the first of the Oracle Database 18c Sharding features blog post series, I covered User-defined sharding method and discussed in detail on how on it can be leveraged for global data distribution and hybrid cloud deployment. In this post, I will discuss the PDB Sharding feature.

The multitenant architecture allows an Oracle database to function as a multitenant container database (CDB). A CDB includes zero, one, or many customer-created pluggable databases (PDBs). A PDB is a portable collection of schemas, schema objects, and nonschema objects that appears to an Oracle Net client as a non-CDB.  Read this doc for the background on CDBs.

From Oracle Database 18c onwards, all Oracle databases will be container (CDB) or pluggable (PDB) databases by default. This PDB Sharding feature adds support for the ability to use PDBs as shards or shard catalog databases within the sharding architecture. PDB Sharding capability renders good manageability benefits for a sharded database. For example – consolidation of shards, manage many as one, database upgrades etc.

In Oracle Database 18c, we support shard as a single PDB in a given CDB. In addition to a single shard PDB, a CDB can contain other non-shard PDBs. 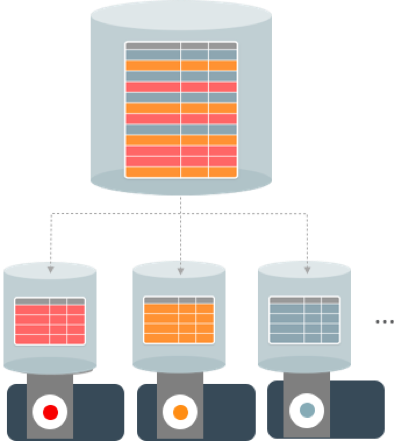 Use ‘add cdb’ and ‘add shard’ GDSCTL commands to add pre-created containers and PDBs to the sharded database.

Note: The ‘add cdb’ command just adds metadata to the catalog for the CDB so that we know the connect string to CDB$ROOT and the GSMUSER password.  The new “-cdb” option on ‘add shard’ tells the shard catalog that the shard is a PDB and that it lives in the CDB specified by -cdb.

For in-depth collateral on Sharding, visit the Oracle Sharding OTN portal – https://www.oracle.com/goto/sharding and do follow me on Twitter  – https://twitter.com/nageshbattula

In my next blog post, I will discuss RAC Sharding feature – a capability which empowers Oracle RAC with the performance and scalability of a Sharded database, with minimal application changes.